Red Cell Distribution Width or RDW test is often a part of Complete Blood Count (CBC) testing. CBC test is prescribed to examine the health by analyzing the components that make up your blood. RDW count measures the variation in the blood cell size. Generally, a big difference of sizes from one cell to another depicts that could have a problem like anemia (low red blood cell count).

For our readers, who are very much interested in knowing the RDW Blood test cost beforehand, we would like to begin with that section.

The RDW test is not taken individually. RDW levels are known from the Complete Blood Count (CBC) Test, which is a panel of tests that also measures WBC, RBC, Platelets, Hemoglobin & a few other blood cell components.

The cost of the CBC test ranges between $28 and $39 in different labs and facilities across the U.S. No prior appointment is required. Compare the price, order your test online and visit the nearest lab during lab business hours. Complete the procedure and get the results in your email in 2 to 3 business days. Doctor consultation is also available for further treatment or for any kind of medical advice.

The following table shows the Complete Blood Count (CBC) test cost at of our partner testing company with over 4500 laboratories (CLIA – Certified) network located across the U.S.

Our CBC testing providers do not accept any health insurance. But, on request, they can provide you with a receipt containing all the details like the name and code of the test, and CPT code which is necessary for insurance reimbursement purposes.

What is RDW in Blood Test?

RBCs, which is otherwise known as Red Blood Cells, helps in carrying oxygen from your lungs to every cell in your body, for a healthier functioning of the organs. Your cells need energy (oxygen) in order to stay healthy and do their job. If your RBCs are of abnormal size, larger in size than, it could indicate health issues.

RDW test is useful in diagnosing the following medical conditions:

RDW results are shown in the CBC Blood Test. The CBC is done to examine the various characteristics of your blood, such as measurements of platelets, RBCs (Red Blood Cell Count), and WBCs (White Blood Cell Count).

What is RDW & Why is it Important?

A healthy individual will have an RDW count between 6 to 8 micrometers (µm) in diameter. If your RDW range doesn’t fall between 6 to 8 micrometers (µm) in diameter and showing a high range, then your RDW is high. Abnormal levels are caused when red blood cells on average are small in size or large in size. Usually, RDW count alone cannot interpret the results. Thus, they are also compared with hemoglobin (hgb) and mean corpuscular value (MCV) values in the Complete Blood Count test.

Your body needs a good amount of oxygen levels to function without any issue. Red Blood Cells do that job of transporting oxygen all over the body. The red cell distribution width (RDW) blood is done to measures the blood cell variation in volume and size. If the RDW count is higher than the normal. this depicts Red Blood Cells’ width is volume is abnormal in size. Which in turn indicates health issues such as nutrient deficiency, anemia, or other underlying condition.

You physician may order for RDW test as part of a CBC if you have:

How is the CBC test performed?

As the name suggests, the Complete Blood Count (CBC) test is a simple blood test. During this test, a lab technician or a phlebotomist will cleanse the skin with an antiseptic and place an elastic band around the upper arm so that the vein becomes visible and swells with blood. He/she then injects a needle and draws a sample of blood in a test tube. After the blood is drawn, he covers the injected area with a band-aid to stop bleeding. The typical blood specimen is then sent to the lab for analysis.

It takes less than 10 minutes to perform this test.

There is no special preparation required for the Complete Blood Count test. But if the blood sample is going to be used for other tests, you may have to fast for a certain period. Your concerned physician will give you specific instructions on diet.

Are there any risks in the CBC test?

There is no possible risk or complication in taking the CBC test. You might have slight pain or bruise in the injected area for a very little period.

What does the RDW Test Result Mean?

In RDW – Red Cell Distribution Width, the word “width” doesn’t directly mean the size of indicidual cells, rather it refers to the difference in the size of Red Blood Cells from your largest to your smallest red blood cell.

A high range could also depict Macrocytic Anemia – Macrocytic Anemia is a situation where your body doesn’t produce enough normal RBCs, and the cells it does produce are wider/larger in size than usual. This can occur due to vitamin B-12 deficiency.

Sometimes, it may be due to Microcytic Anemia – In this type, your body doesn’t produce enough normal RBCs, and the cells it does produce are smaller in size than usual. This can occur due to iron deficiency.

However, RDW results alone cannot be taken into account to decide the exact disease or diagnosis process for the case. Your physician will also look into the mean corpuscular volume (MCV) test, which is also part of a CBC — to combine results and provide an accurate treatment recommendation.

If your CBC test results show, normal RDW levels but low MCV levels, you may have anemia resulting from a chronic disease, such as chronic kidney disease (CKD).

If your RDW levels are normal and having high MCV levels, it may be a result of aplastic anemia. Aplastic Anemia is a blood-related disorder where no more new blood cells are produced, including red blood cells.

If your test results show low RDW levels, then there are no hematologic disorders or serious health issues.

The RDW test can be done in any of the following locations across the U.S. by visiting the nearest lab. To know the RDW test cost, refer to the first section of the article. 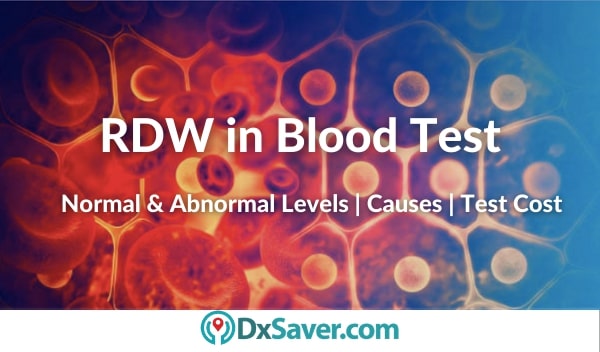