A survey conducted by the Centers for Disease Control and Prevention (CDC) in 2018 says that nearly 3 million people are diagnosed with Chlamydia in the United States every year. Nearly half of the people diagnosed with Chlamydia are women who fall under 15 to 24 year age group. As the symptoms of Chlamydia are not shown at an initial stage of infection, we highly recommend every sexually active young woman to get tested for Chlamydia at least once in a year. We also recommend young men getting tested for Chlamydia as well.

The article below covers the chlamydia test cost, symptoms of chlamydia in men and women, diagnosis, prevention, treatment and how to get tested for chlamydia sitting at home.

How much does Chlamydia test cost?

So many insurance companies might cover the cost of these additional tests.

Our STD testing providers offer only the screening test for Chlamydia and do not accept any health insurance. But, on request, they may provide the itemized receipt which contains all the required details like name and code of the test, and CPT code necessary for insurance reimbursement purposes.

What is Chlamydia and how is it transmitted?

Sexually transmitted diseases are infections passing from one person to another through sexual contact. These infections are caused by microorganisms like bacteria, parasites, yeast, and viruses. There are more than 20 types of STDs.

Chlamydia is one of the most common STDs found in the United States. Chlamydia is caused by a bacterium called Chlamydia trachomatis which infects both men and women. Lymphogranuloma venereum is the other type of STD caused by this bacterium.

If you had Chlamydia treated in the past, there are greater chances for reinfection while having unprotected sex with the person affected by Chlamydia.

When Chlamydia gets transmitted through oral sex, it is called Oral Chlamydia. Oral sex is very common in the United States and widespread. It carries a higher degree of risk as a small wound or cut in the genital tract increases the chance of bacteria transmission. Oral sex also includes nippling and oro-anal sex.

Eye Chlamydia is transmitted through the hand to the eye from the spread of infection in the genital secretions. It is also called Chlamydial Conjunctivitis. The main cause of eye chlamydia is touching your eyes without washing your hands after having vaginal sex or oral sex with the Chlamydia infected person.

What are the symptoms of Chlamydia?

Chlamydia infected person does not show any symptom for several weeks even after the infection or until it spreads to other body parts.

How is the Chlamydia infection diagnosed?

The specimen is sent to the lab for analysis. A urine sample can also be tested to check the presence of Chlamydia trachomatis. The specimen can also be self-collected at home where the special home kits are offered by some labs in all the cities of the United States.

Right time to test for Chlamydia

If you suspect the possibility of Chlamydia infection, then the right time to take the Chlamydia test is at least within 1 to 5 days of exposure.  To ensure that you have got rid of the Chlamydia bacterium, get the test done again after 1 month of antibiotic treatment.

Younger people who are sexually active and older women having multiple sex partners are advised to take the Chlamydia test at least once in a year.

Testing for Chlamydia and Gonorrhea

Chlamydia and Gonorrhea are the most common sexually transmitted diseases. The pattern of transmission, symptoms, test, treatment, and complications are almost the same. When you don’t experience any symptoms, it’s better to do both the tests as they both require only a urine sample. If diagnosed at an early stage, Chlamydia and Gonorrhea can be easily treated and cured.

Women are encouraged to avoid cleansing the labial area (outer part of the vagina) before providing a sample. Otherwise, there is no special preparation required for the test.

What is the treatment for Chlamydia?

Antibiotic therapy is used to cure Chlamydia infection. Single-dose or several doses of antibiotics like azithromycin or doxycycline may be prescribed by your physician if you are diagnosed with Chlamydia. Sometimes the physician might also recommend your sex partner to get treated for the prevention of the further spread of disease. It is very important to tell your sexual partner regarding your Chlamydia test as he/she also has a higher chance of getting the infection.

After the antibiotic treatment, women are advised not to have sexual intercourse for a minimum period of seven days.

What happens if Chlamydia is left untreated?

Chlamydia, if left untreated may lead to some severe diseases in both men and women.

Sometimes the severity of Chlamydia infection requires hospitalization and it also increases the risk of getting HIV.

How to prevent Chlamydia?

To prevent Chlamydia infection, have safe sex using male or female condoms or dental dams and limit the number of sex partners. If you suspect of being infected with Chlamydia, avoid sex till you are tested and treated completely.

Chlamydia test can be done in the following states either at the provider’s location or at home. To know the Chlamydia test cost, please refer to the first section of this article.

If you are interested in some other articles from us, please check the below articles: 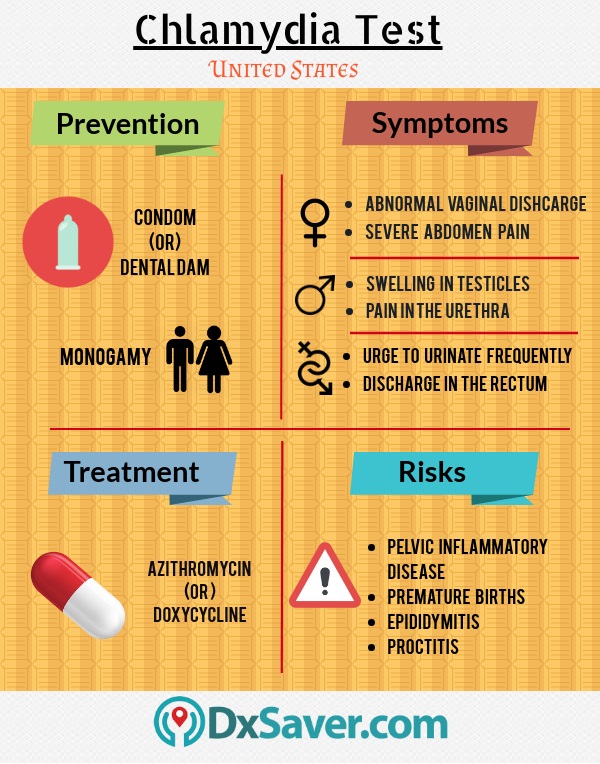