An ANA test is taken to determine the level of ANA in the blood.  The risk of an autoimmune disorder is more if the level is higher. The conditions such as infections, cancer, and other medical diseases can also result in a positive ANA test.

The article below will cover the significant and relevant topics of ANA test that include the Test cost of ANA, why is ANA test done, how the test is performed, Preparation before the test, Risk factors of the ANA test.

For our readers, who are very much interested in knowing the ANA test cost beforehand, we would like to begin with that section.

The antinuclear antibodies/ANA test cost ranges between $59 and $62 in different labs and facilities across the United States.

No prior appointment is required to get tested for ANA. Compare the price, order your test online and visit the nearest lab during business hours to get your test done. After completing the test procedures, results will be mailed to you in 2 to 3 business days. We also provide doctor consultation for any further treatment and for any kind of health condition.

The following table shows the ANA blood test cost at 2 of our partner laboratories (CLIA – Certified) network located across the United States.

Our ANA blood test providers do not accept any health insurance. Although, on request, they can provide you with an itemized receipt containing all the details like the name and code of the test, and CPT code which is necessary for insurance reimbursement purposes.

What is an ANA Test?

Antibodies are proteins that are made by the immune system. They allow the body to recognize and fight infections. Antibodies mainly target harmful substances, like bacteria and viruses, by activating the immune system to vanish them. In rare cases, antibodies unknowingly target healthy cells and tissues. This action is called an autoimmune response. Antibodies that attack healthy proteins within the nucleus are known as antinuclear antibodies (ANA).

Why is the ANA blood test needed?

How is the ANA test performed?

The ANA test is similar to other blood tests. A phlebotomist will tie an elastic band around your arm so that your veins swell with blood which makes it easier for them to find a vein. Then they will clean the site using an antiseptic, they’ll insert a needle into a vein. You might feel a moderate pain when the needle goes inside, but the test isn’t painful.

Blood is collected in a tube attached to the needle. After the blood is collected from your vein, the phlebotomist will remove the needle and cover the puncture site using cotton or a small plaster. For infants or children, a lancet will be used to puncture the skin, and blood will be collected using a small tube called a pipette. The blood is also collected on a test strip. Finally, the blood is then sent to a lab for analysis.

No serious preparation is required for the ANA test like fasting. However, it’s mandatory to tell your physician about the medications and supplements that you’re taking, even over-the-counter ones. Some drugs, which include seizure and heart medications, may affect the accuracy of the result.

Are there any risks in the test?

The risks of doing an ANA test are no serious. People with veins that are harder to access may experience more discomfort than others during the blood test. Bleeding, infection on the puncture site, fainting is the common risk of any blood test.

What does the ANA test result mean?

If your physician has ordered the test, then they may recommend a referral to a rheumatologist, who is an autoimmune disease specialist. They will review if there is any abnormal ANA in your body. They help to determine accurate test results or if your test results are related to any specific health condition.

A positive result doesn’t mean that you have an autoimmune disease. Up to 15 percent of healthy people have a positive ANA test and that is called a false-positive test result. ANA titers may also increase with age among healthy people, so it’s very important to discuss with your physician about you have symptoms and what the result means to you.

A positive ANA test indicates that you have high levels of ANA in the blood. A positive ANA test is reported as a ratio and as a pattern, such as a smooth or speckled. Few diseases are more likely to have patterns. If the titer is higher, then the result is a “true positive”, which means you have significant ANAs and also an autoimmune disease.

Talk with your physician about what your levels mean and how your symptoms are explained by the presence of ANA. If you test positive for ANA, then your physician will recommend more tests in order to help find out which autoimmune disorder you have or if the results are related to a specific condition.

An ANA test can be done in any of the following locations across the U.S. by visiting the nearest lab. 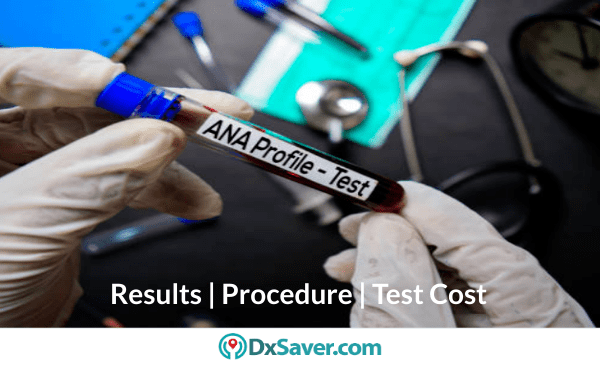